The hypocrite element, if one exists in any society, is a source of weakness and a danger to its health and its very existence. When the holy Prophet came to Madinah in Hijrah, his arrival was welcome to all the patriotic citizens: it not only united them in common life and healed their old differences, but it brought honour and light to them in the person of the greatest living Prophet. But there were some baser elements filled with envy. Such hopes as they had entertained of attaining power and leadership by playing on the animosities of the factions were now dashed to the ground. They now began to work underground. For fear of the majority they dared not oppose the new growing Brotherhood of Righteousness. They tried to undermine it by intriguing secretly with its enemies and swearing openly its loyalty to the holy Prophet. They were thoroughly unmasked and discredited at the battle of Uhud.

So He hath put as a consequence hypocrisy into their hearts, (to last) till the Day, whereon they shall meet Him: because they broke their covenant with Allah, and because they lied (again and again). (Quran 9:77)

If men are false to their covenants and words, the natural consequence will be hypocrisy to cover their falsehood. Such consequences will last till the Day of Judgment, when they will have to account for their deeds. They may think that they are deceiving men by their hypocrisy, but they cannot deceive Allah, to Whom all their most secret thoughts and plots and doings are known.

The Arabs of the desert are the worst in Unbelief and hypocrisy, and most fitted to be in ignorance of the command which Allah hath sent down to His Messenger. But Allah is All-knowing, All-Wise. (Quran 9:97)

Some of the desert Arabs look upon their payments as a fine, and watch for disasters for you: on them be the disaster of evil: for Allah is He That heareth and knoweth (all things). (Quran 9:98.)

The payments refer to the regular Charity established by Islam-the obligatory alms. If you look upon them as a fine or a burden, their virtue is lost. If you rejoice that you have there an opportunity of helping the Community to maintain its standards of public assistance and to suppress the unseemly beggary and loathsome importunity whose relief is only governed by motives of getting rid of awkward obstacles on the way, then your outlook is entirely different. You wish for organized and effective efforts to solve the problems of human poverty and misery. In doing so, you get nearer to Allah.

The vanguard (of Islam)- the first of those who forsook (their homes) and of those who gave them aid, and (also) those who follow them in (all) good deeds,- well- pleased is Allah with them, as are they with Him: for them hath He prepared gardens under which rivers flow, to dwell therein forever: that is the supreme felicity. (Quran 9:100)

The vanguard of Islam-those in the first rank are those who dare and suffer for the Cause and never flinch. The first historical examples are the Muhajirs and the Ansar. - The Muhajirs-those who forsook their homes in Makkah and migrated to Madinah, the Holy Prophet being among the last to leave the post of danger, are mentioned first. - Then come the Ansar, the Helpers, the citizens of Madinah who invited them, welcomed them, and gave them aid, and who formed the pivot of the new Community. - Then are mentioned all who follow them in good deeds: not only the early heroes and ordinary men and women who had been Companions of the Prophet or had seen him, but men and women in all ages who have lived noble lives. In spite of all their sacrifice and suffering they rejoice in the precious gift of the Good Pleasure of Allah, and their Salvation is the Supreme Felicity which such Good Pleasure gives, symbolized by the Gardens of Heaven.

Note the description of the final accomplishment of the destiny of man. In mathematical science it would be like a letter or formula which would sum up a long course of reasoning. In this very Surah it occurs before in 9:72 and 9:89.

Certain of the desert Arabs round about you are hypocrites, as well as (desert Arabs) among the Medina folk: they are obstinate in hypocrisy: thou knowest them not: We know them: twice shall We punish them: and in addition shall they be sent to a grievous penalty. (Quran 9:101)

The desert Arabs were not all simple folk. There were cunning hypocrites among them: both among certain tribes encamped round about Madinah and certain others in Madinah itself.

The Hypocrites, men and women, (have an understanding) with each other: They enjoin evil, and forbid what is just, and are close with their hands. They have forgotten Allah, so, He hath forgotten them. Verily the Hypocrites are rebellious and perverse. (Quran 9:67)

And behold! The Hypocrites and those in whose hearts is a disease (even) say: "(Allah) and His Messenger promised us nothing but delusion!" (Quran 33:12)

Before this year's mass attack on Madinah the Muslims had successfully reached the Syrian border on the north, and there were hopes of reaching Yemen in the south. The holy Prophet had seen signs of expansion and victory for the Muslims. Now that they were shut in within the Trench on the defensive, the Hypocrites taunted them with having indulged in delusive hopes. But the event showed that the hopes were not delusive.

Truly, if the Hypocrites, and those in whose hearts is a disease, and those who stir up sedition in the City, desist not, We shall certainly stir thee up against them: Then will they not be able to stay in it as thy neighbours for any length of time: (Quran 33:60)

It was necessary to put down all kinds of unseemly conduct in the Prophet's City. And here is the wanting in the plainest terms. And the warning had its effect.
The Jewish law was much more severe: see 33:26. That severity is mitigated in Islam. But it is a universal principle that any element which deliberately refuses to obey law and aggressively tries to subvert all order in society, secretly and openly, must be effectively suppressed, for the preservation of the life and health of the general community.

One Day will the Hypocrites- men and women - say to the Believers: "Wait for us! Let us borrow (a Light) from your Light!" It will be said: "Turn ye back to your rear! then seek a Light (where ye can)!" So a wall will be put up betwixt them, with a gate therein. Within it will be Mercy throughout, and without it, all alongside, will be (Wrath and) Punishment! (Quran 57:13)

Watchful preparation in Life, and the light of Faith, which reflects the divine Light, are matters of personal Life, and cannot be borrowed from another. So, in Christ's parable of the Ten Virgins (Matt. 25:1- 13), when the foolish ones had let their lamps go out for want of oil, they asked to borrow oil from the wise ones, but the wise ones answered and said, "Not so; ... but go ye rather to them that sell, and buy for yourselves".
The wall will divide the Good from the Evil. But the Gateway in it will show that communication will not be cut off. 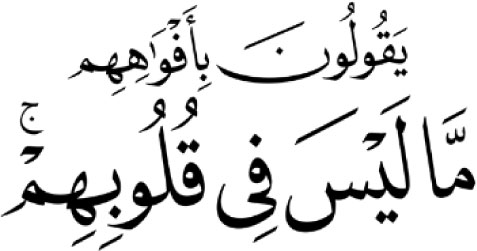