Orientalism is the concept that there is something very special and different about the thought of those living in the East, which can be discovered through the methods of scholarship current in the West. It is a reflection of the relationship of imperial and intellectual domination of a West which feels it is superior to an 'inferior' East. This often results in an understanding of Islamic philosophy which sees the latter as essentially unoriginal, derivative and of only historical interest. While orientalists have produced interesting and important work, most fail to appreciate the independent status of the material which they analyze.

1. The notion of Orientalism 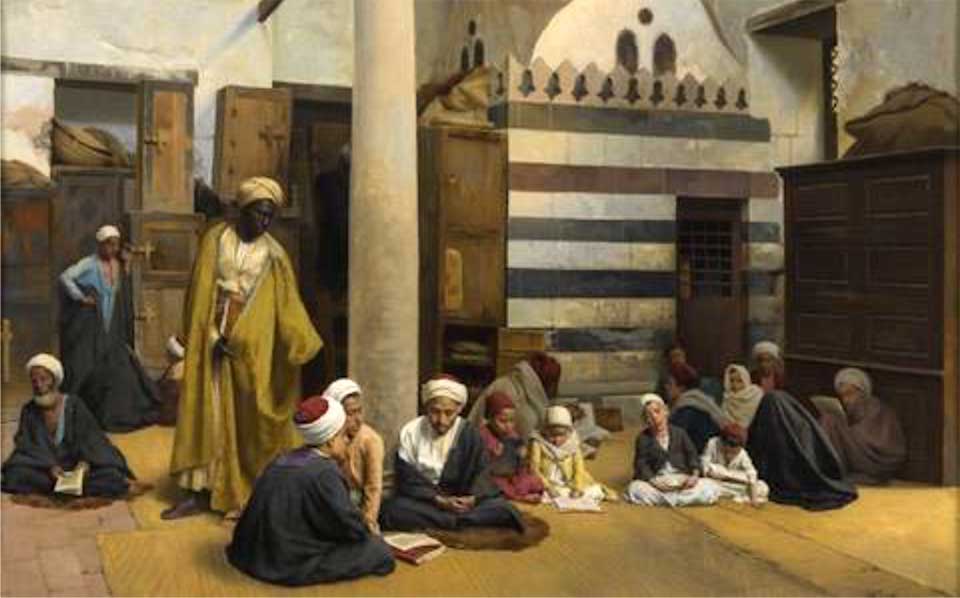 Orientalism is the branch of scholarship that uses traditional Western methods as a means of understanding and gathering knowledge pertaining to the Orient. The term was also used by Edward Said (1978) to elucidate his own challenge to the validity of such methods.

On the one hand, Orientalism has given us much of what we know about the Oriental world at large. Late nineteenth-century authors are especially worthy of consideration for their contributions to an understanding of foreign cultures and peoples. On the other hand, however, several problems arise from the attitudes and methods used in traditional Orientalist discourse, which in turn has had an impact - often negative - upon Western consciousness. This influence and distorts the framework through which the West approaches the Orient in general and Islam in particular.

The Orient encompasses a far greater area than simply that of the Arabs and the Muslim community; exotic images from India, China, Japan and Korea are conjured up in the minds of Western people when they think of the Orient. However, Orientalism has had a particular impact on the study and understanding of Islamic philosophy. Many scholars' understandings of Islamic philosophy is, 'that Islamic civilization as we know it would simply not have existed without the Greek heritage'.

2. Orientalism as a political doctrine

Orientalism has several different but interrelated meanings. In its general sense, it describes the way in which the West looks at the Orient in order to understand it within the context of Western experience. More specifically, Orientalism is a categorical approach by Western scholars as an attempt to form a collective body of knowledge about the Orient. Included in this enterprise is the study of Eastern philosophies, history, religion, culture, language and social structures. To understand the effect of Orientalism on Islamic philosophy, however, we need first to understand it as a political doctrine; from its inception, Orientalism was primarily political and secondarily cultural and philosophical.

Orientalism as a system of the knowledge began in the late seventeenth century, reaching its zenith in the late nineteenth and early twentieth centuries. During this period Britain and France, and later the USA, were involved in the struggle for Western domination. This Anglo-French-American experience was essentially imperialistic. Implicit in the Orientalist attitude, therefore, is the belief that the Orient had passed its golden age as the West was being 'born', and was thus in decline. This view of the Orient as backward and barbaric led to interpretations which resembled more closely what scholars wished to believe, rather than what actually was the case. In philosophy, this attitude led to the belief that the entire system of Islamic philosophy was based upon the Greek inheritance; this in turn led to the belief that Islamic philosophers were not good Muslims, as philosophy and religion apparently could not be reconciled.

Along with this attitude, Orientalism also played an active role in advancing Western interests in the East. The pursuit of knowledge of the Orient was often not an end in itself. The study of Islamic philosophy merely confirmed many Western scholars in their belief of the superiority of their own culture.

3. The Orientalist approach to Islam

From the beginning, Orientalists have viewed Islam in two ways. First, as it had borrowed liberally from Abrahamic (Judaeo-Christian) traditions, Islam was considered to be a crude parody of Christianity. Second, Islam was looked upon as an alien menace which historically had enormous military and political success throughout the world, and consequently was a threat to Western civilization.

In Orientalism, Islam first had to be placed within the realm of Western understanding with respect to Christian concepts rather than regarded on its own terms. One way of accomplishing this was to make analogies between Christian religions and Islam. The obvious parallel is the one which some Orientalists draw between Muhammad and Christ. Since Christ is central to the Christian faith, Westerners assumed that Muhammad holds the same place in Islam. This misconception helped to popularize the use of the name 'Mohammedanism’; a term highly offensive to Muslims. The Christ analogy also served to reinforce the notion that Muhammad was nothing more than an 'impostor' and a pale version of the Christian Messiah.

Islam also provided a provocation to the West in another respect. From the time of the Arab conquests in the seventh century to the ascendancy of the Ottoman Empire, Islam itself posed a formidable challenge to the Christian world. Islamic empires - Arab, Ottoman or those in Spain and North Africa - had quite effectively challenged and, at least for short periods of time, dominated Christian Europe. 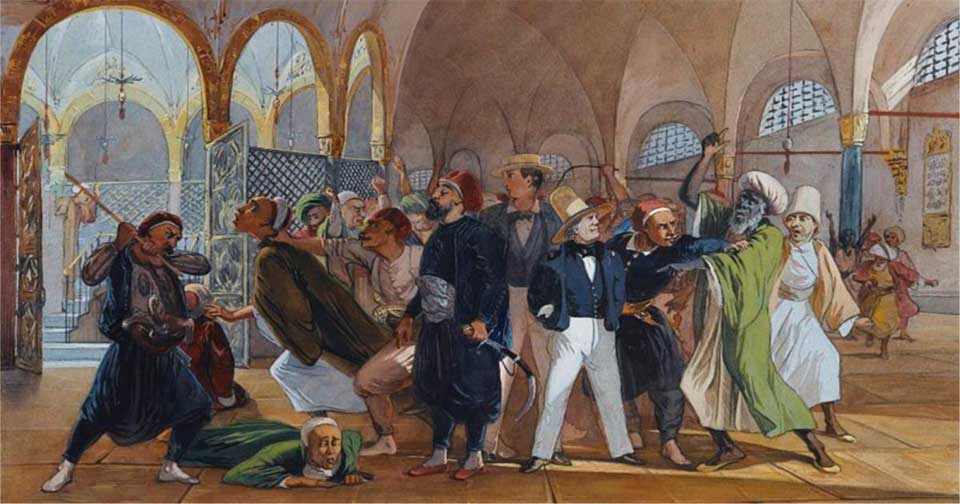 The first wave of Muslim conquest in ad 632- 4 secured for the Arab Muslims the strongly Hellenized territories of Syria and Egypt along with the western part of the Sassanian Persian empire. At first the new conquerors may have been suspicious about the culture of classical antiquity, as both religion and language separated the Arab Muslims from the vanquished peoples. However, the former overcame their anxiety remarkably quickly and began instead a cultural conquest and assimilation of ancient knowledge.

Philosophers such as Ibn Sina, al-Kindi, al-Farabi and Ibn Rushd all interpreted the Islamic inheritance of classical philosophy and attempted an assimilation of it into mainstream Islam in their writings. The classification of the sciences, in encyclopedic proportions, was carried out by the likes of alKhwarizmi in his Mafatih al-'ulum, and by a group of scholars in the ninth and tenth centuries who called themselves the 'Brethren of Purity' (Ikhwan al-Safa'). The attitude of these and other philosophers was one of acceptance and the transferring of intellectual history, rather than an adoption of so-called 'foreign' ideas. Many of these ideas were foreign indeed, as we do not see any mention of them in the Qur'an and earlier traditional works, but the underlying theme was the gaining and spread of knowledge, 'ilm. Gaining of knowledge is obligatory according to the tradition of Muhammad, the prophet of Islam, who said: 'Seeking knowledge ('ilm) is obligatory upon all Muslims, men and women.'

This approach is clearly brought out in the epistles of the Ikhwan al-Safa'. During a lengthy debate in these epistles, between humans and animals in the court of the king of the jinn, examples from history are given in which the conquering nations took over, translated into their language and made their own the knowledge of vanquished peoples. Solomon is cited as a classic example: Our sciences and the sciences of all the nations are [acquired] one from the other. If this was not the case, from where did the Persians get astrology, astronomy and observatories? Did not they take it from the Indians? If it was not for Solomon, where did the Israelites get the sciences.... He took it from the kings of all nations when he conquered their territories and transformed them to Hebrew...

This transcendental open-mindedness has been misrepresented many times by Western scholars, who are more interested in finding something new in the Islamic sciences than in attempting to understand the transmission of the corpus of human knowledge from one people to another. The Orientalist outlook mentioned above appears clearly when scholars such as Walzer and Rosenthal expend much effort in finding faults within the Islamic philosophical system, rather than using their impressive abilities to develop a better understanding of the amalgamation and legacy that has been left by the Islamic philosophers. In Walzer's important work, Greek into Arabic (Walzer 1962), the attitude is that everything the Arab philosophers had to say was 'borrowed' from the Greeks. Even when we are not able to find the source, according to Walzer, it can be assumed safely that the original Greek source is no longer extant.

This imaginary dichotomy between philosophy and theology, as assumed by the Orientalists, has led to a severe crippling of the understanding of the achievements of the Islamic philosophers. This attitude itself has its roots in the initial reaction to the impact of Greek philosophy upon Christianity. Orientalist scholars assume that the Muslims felt exactly the same as the early Christians did about the conflict between philosophy and theology. Of course there were debates between Islamic philosophers and theologians, but in the Arab and Islamic milieu the attitude was rather different from that in the Christian world; in the former, the philosophers were simply taking what they assumed was their legitimate inheritance from the corpus of human knowledge. In conclusion, these notions about the Orient eventually 'created' the Orient. The 'Orient' (East) is, in fact, only East from an European perspective: it is a relative, not absolute, term. More precisely, the 'Orient' is whatever the Orientalists say it is: it is a series of abstractions based upon Westerngenerated ideas rather than upon Oriental realities. Islamic philosophy needs to be studied as more than just a reflection of Greek ideas; it needs to be considered as an area of thought which came into contact with a variety of different cultures, and which developed out of these and out of a meditation on the Islamic sciences themselves into an independent and original form of philosophical thought.

Fain would they extinguish Allah's light with their mouths, but Allah will not allow but that His light should be perfected, even though the Unbelievers may detest (it). (Quran 9:32)