The term "secularization" may also occur in the context of the lifting of monastic restrictions from a member of the clergy. (wikipedia)

But what I want to say is not that, but the following: the state has never become separated from the church, no matter how is it communicated. The fact that there is a law on the right to freedom of conscience and religion and on the status of churches, denominations and religious communities shows subordination, so that the church cannot function independently of the state. Only the one who subordinates others creates law over the others. However, this could never happen in reverse. So, a church could never promulgate regulation concerning its behavior with the state. But I do not dare to criticize this condition, and save us God from having the rule of the churches, and their staff in their actual level, because they would mess up everything. It's quite normal to have them within their limitations. My aim is merely to record the facts: secularization doesn't exist according to the above definition. There is a kind of interest alliance between state and church, where the state collects votes through the churches, while the church receives assets and rights from the state. Meanwhile, they are proclaiming that they act independently. This business relationship that virtually led to the materialization of the Church, and caused the extinction for which it was born: the faith.

Now, when the world is in distress, one can ponder about it. Most believers desire faith, the call of God. The depth of faith can penetrate us even in the corner of our room and is equally pervasive than in the temples and mosques. It was completely superfluous to loot the Incas, Mayans and Aztecs to gild the ornaments of our temples. It was also superfluous to deal with slave-trafficking, to build mosques out of billions of oil revenues, to employ foolish devotees who are there in order only to certify the truth of the emir or king with the words of the Quran. It turns out who in this situation is the true Master of life and death? Who owns the true law and power? We realize that those who exercise earthly power have only the means at their disposal to steer us, regulate us, the mortals, according to their will, but they have no power in the creation at all. The first wind blows them away. They are building a world of lies around us, which can only be upheld with an additional lie on daily base, which is being forced upon us with increasing strength.

Thinking and opinion forming has different levels. Some people cannot further see than the borders of their own villages. Some people live and think at the level of their city. Some people try to see, express their views within the borders of their country and some who go out into the international space and show their awareness there. I mention these levels because we lock ourselves into these and into more specific spaces, create real and false laws, then establish our own depression that results our distorted self, our artificial lives. If we do not go beyond that limits and reach the dimension of Creation as a whole, and try to see our own vulnerabilities, mistakes, and futility from that level, we will never be able to correct our intentions and actions.

Notice that you are still dealing with yourself! You are concerned nothing more than your survival and your financial situation. However, if the 7 billion people will think this way, the disaster will reoccur at a much higher level. I know you are suffering; you are panicking, you are worried about of yourself. However, if you are not able to deal with the current calamity at the level of the human community in order to facilitate its integration into a much higher order, then the very existence of the human community itself will be questioned. You're involved in it with your Ego that started the whole process! Why? Don't you see that your village needs to integrate into the infrastructure of a nearby city? And the city into the country and the country into the international trends? The international trend also needs to integrate in somewhere!

Welcome secularization! Bind our treacherous priests, sheikhs, put the chains on religions, churches. Make thousands of earthly laws! However, no law can fix free thought. And with thought, come on to the whole Creation! Welcome recognition! Beyond that limit it is not a religion anymore, but faith, the recognition of the Creator and the true context of Creation. It works with and without secularization.

History repeats itself. Let's judge if any human-made law or resistance was affecting the outcome of the events described here? Here it is:

Has not the story reached you, (O people!), of those who (went) before you? - of the people of Noah, and 'Ad, and Thamud? - And of those who (came) after them? None knows them but Allah. To them came apostles with Clear (Signs); but they put their hands up to their mouths, and said: "We do deny (the mission) on which ye have been sent, and we are really in suspicious (disquieting) doubt as to that to which ye invite us." (Quran 14:9)

Even the names of all the Prophets are not known to men, much less the details of their story. If some "news" of them (for the word translated "story" may also be translated "news") reaches us, it is to give us spiritual instruction for our own lives.

That is, either that the Unbelievers metaphorically put their hands up to the mouths of the Prophets to try to prevent them from proclaiming their Message, or that the Unbelievers put up their fingers to their own mouths, as much as to say "Don't listen to them," or bite their own fingers in token of incontinent rage. Whatever construction we adopt, the meaning is that they were intolerant of their prophets even as the Quraish were intolerant of Al Mustafa and did all they could to suppress Allah's Truth.

Their apostles said: "Is there a doubt about Allah, The Creator of the heavens and the earth? It is He Who invites you, in order that He may forgive you your sins and give you respite for a term appointed!" They said: "Ah! ye are no more than human, like ourselves! Ye wish to turn us away from the (gods) our fathers used to worship: then bring us some clear authority." (Quran 14:10)

The Prophets (generally) clear both kinds of doubt. "You cannot doubt the existence of Allah! Behold His works! We are not speaking for ourselves or deceiving you. We speak according to the Message of inspiration from Allah." Notice that the doubters had said to the Prophets, -Ye invite us. - The Prophets say: "It is Allah Who invites you, and He does it to save you by His grace.

The respite “for a term appointed”, perhaps mankind repents, is a recurring thought in the Quran. Quotes similar to this and related to our destiny can be found here: 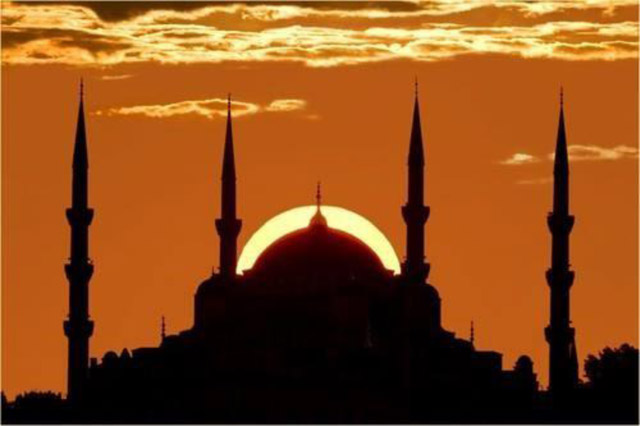