With every difficulty there is a relief

Many thanks for my life-relationships (there were a couple) for plundering me. They did not know how good they did to me. Many thanks for them for pushing me towards the way of spiritual development. If they were not there, I will never get to another understanding of the world that is much easier to live in. I thank Bosnia, Africa for those many experiences that I collected by suffering, Egypt, Al-Azhar for wisdom and Gödöllő for science. The only thing I could not utilize anywhere is the moral values what I brought from my parent's house. No problem, many thanks also to them, it was a huge investment from their side, which resulted compunction all my life, because I could never comply to those values. But I think no one can comply them today. This lasted until I had a conscience. The conscience is there even today, but in a different form.

Virtually Balázs Mihálffy, the gentleman took until I had aspects like apartment, car, career, to show off things to others, to hide things from others. Fate has gradually deprived these of me. Yes, it was painful, because a person who is used to these things and who by his education has to achieve something what is called welfare, would find difficult to give them up. But it happened. The stations listed in the introduction have helped me to get being used to the new status. Now, for all the treasures of the world, I would not replace my current situation with what it was. As long as you have something, you only have people who envy you. I haven't people who envy me for many years.

As the door of the material world closes behind us, another opens. I know you are expecting me to describe the closeness to God, enlightenment and other feelings with reverential words, but Hungarian people do not understand such words. On the other hand, if I write that this is a world where you can "shit on everything," you understand, right? If you once get into this world, tax office, earthly law, Orban, Gyurcsany and everyone else who wants to lock you up in a "cage" will lose their significance. Because this kind of being frees you from the cages. Who is the leader than, who can exercise power over citizens who are freed from their cages and shit on everything and everyone? Of course, no one. Who is the leader who would be happy, if you say, fuck your rules, because I am subject to other laws that applied to Mars, to Jupiter, to the entire Universe, to Aristotle, Plato and a thousand others? I did deliberately not mention prophets.

Sanctions have no effect, you can't be frightened, no weight for expressions like: it will have consequences, you can even die! Because then you wave with your hands, smile, and respond: no problem, then I will continue this life in the eternity without my body. For those who are deeply involved in spirituality, this existence is only a transition. This is unbelievable for the materialistic perception of Europe, but as you are deprived of material issues, it develops inside you, believe me. First you escape to this state as a defense then you realize that there is a conscious form of it, called Islam. If you learn it and discover its wisdom, no longer earthly delusion and deception will affect you.

The code of conduct what are applied by the micro-communities within their earthly states, can based on traditions, norms among human beings or laws that are changing every year therefore are incomprehensible, inconceivable and their scopes are narrow. It's like having to get used to a hierarchy of monkeys in a zoo, which is different in another zoo, and completely different from the order of the savannah.

I do not encourage anyone to rebel. I know there must be earthly law, too. And these are the ones that the majority wants. I must follow them even if those are not in accordance with my internal law. But just as the prisoner closes his eyes in his cell and his thoughts can fly freely, so your inner harmony will bring freedom if you exclude yourself from the world from which, thanks to God, I have been expelled. So, in hindsight, I see that the material world was the real bondage. The Quran describes this principle much nicer, exemplifying the life and trials of Mohammed (peace be upon him):

The Holy Prophet's human nature had been purified, expanded, and elevated, so that he became a Mercy to all Creation. Such a nature could afford to ignore the lower motives of ordinary humanity which caused shameful attacks to be made on him.

And removed from thee thy burden (Quran 94:2)

It is indeed a grievous and galling burden for a man to fight single-handed against sin. But Allah sends His grace and aid, and that burden is removed, or converted into joy and triumph in the service of the One True God.

The Prophet's virtues, the magnanimity of his character, and his love for mankind were fully recognised even in his lifetime, and his name stands highest among the heroic leaders of mankind

So, verily, with every difficulty, there is relief: (Quran 94:5)

This verse is repeated for extra emphasis. Whatever difficulties or troubles are encountered by men, Allah always provides a solution, a way out, a relief, a way to lead to ease and happiness, if we only follow His Path and show our Faith by patience and well doing. The solution or relief does not merely come after the Difficulty: it is provided with it.

Verily, with every difficulty there is relief. (Quran 94:6)

The words understood may be: from thy immediate task, that of preaching to men, denouncing sin, and encouraging righteousness; or, from the difficulties that confronted thee. When that happens, that does not finish the labours of the man of Allah. 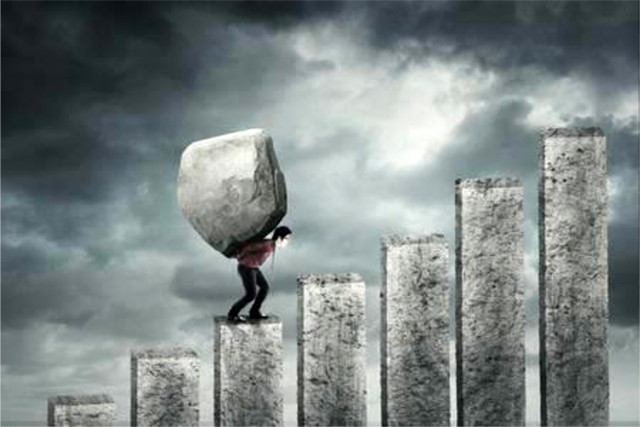