Locked up in freedom

I hear that a lot: if I get a bit better, I will do this and that. First, I fix my life to be in order, then we will be happy, etc. Well, I have some bad news. The beautiful thing about life is that it never gets better. It's like a postal check. You think you’ve already paid off all your debts then the postman throws in a few more. Just as you never get rid of debt because it’s structured that way, to settle the life is the same. As you manage to sort out your requirements, your needs will grow as well. But let's not run so far ahead.
You are free. At least that's what you believe. In reality, however, you are locked up in freedom. You are imprisoned in the freedom that you believe in. It’s a freedom where you say what you want, no one cares about it, while you pay in the meantime the obligations that are hung around your neck. Due to the freedom of speech there’s a sense of freedom, but in reality, it’s a bondage because you never get rid of your debts that you pay off all month. You pay for those who create chaos around you. You think you serve regulating forces who want you to prosper, but that’s a misconception. You are following the forces that create chaos, building their strategy on the very instinct that works within you: "I'm going to settle my life." No matter how much burden is placed on you in an unpredictable way, you build a system in the chaos and systematically take one burden off. One by one. Then another burden will come. Meanwhile, the feeling of freedom burns within you. You protest, remonstrate, but who the fuck is paying attention if you settle the expenditures in the meantime? Meanwhile, many smart people give damn good recipes, party programs, religious precepts to bear the burdens easier and to get through life smoothly.

The antidote of chaos is not the obedience, but the counter-chaos. At least for a while. Because if you disobey en masse, you create chaos too, and it breaks the logic of the chaos makers. They will miss the income because that is all that matters and they will think about your destiny. If they see that the potential is there to put you back among the burden bearers because still some blood remained in you that can be sucked out, they will make concessions. They make you believe that democracy wins, freedom of speech brings its fruits and the rest nonsense. But this is just a scam. It’s about creating another false feeling. Order is restored, your life is temporarily a little easier, but you pay again!
But if they see that concessions will not result profit, you will never be able to bear any more burdens, they will kill you. They kill you en masse without you noticing it. Africa is a good example for that. Humanitarian organizations, NGOs are helping for a couple of thousand people with loud media support, but leaving millions immersed in destruction in silence. Anywhere they are able to kill you, don’t worry, just the means are different.
Even an atheist believes in the soul, otherwise the science of psychology would not have been created. In the toolbox of psychology, the soul is treated on the basis of the cause and causal relationships discovered by man so far, however the faith transports the soul to the irrational space, tearing it out of the clutches of men. At this point, priests, sheikhs, make another attempt to bring the soul back into a very material space, which is specifically their interest, but if you cross this barrier, you will experience not the simple sense of freedom but the real freedom. This is faith. You cannot change the earthly burdens and their manipulations. This is the fate that cannot be changed.
But you can shape how you experience it all. And that is the fate that is in your hands.
A Hindu guru who has been sitting there naked for twenty years on the banks of Ganges in a state in which he has turned off his earthly senses, I don't think he is upset by his electricity bill, if he has it at all. However, it bothers the service provider if he doesn't pay while he was on the list of consumers and they have calculated with him. Don't be mistaken, this is just an example for the sensual perception of reality. Because reality is often not the one what we plan, but the feeling as we perceive it can be shaped and made livable for ourselves.
Nor do I want the faith to be reinterpreted into the state of “who the fuck cares it”. There are certainly perceptions where this is the goal, but Islam is not the one. Islam teaches us to see reality, to perceive scams, because we know exactly the nature of Satan. We learn how to live with reality while we do not break ourselves out of it as much as the guru on the banks of Ganges. In the meantime we teach about a better world in which our souls are free and where "our things are going to be settled well." We are convinced, if obscurity is removed from the eyes of many, and deafness, blindness will cease, the world will be a different place. No matter if some of our teachers are bad but our Book is very good:

The parable of those who reject Faith is as if one were to shout Like a goat-herd, to things that listen to nothing but calls and cries: Deaf, dumb, and blind, they are void of wisdom. (Quran 2:171) 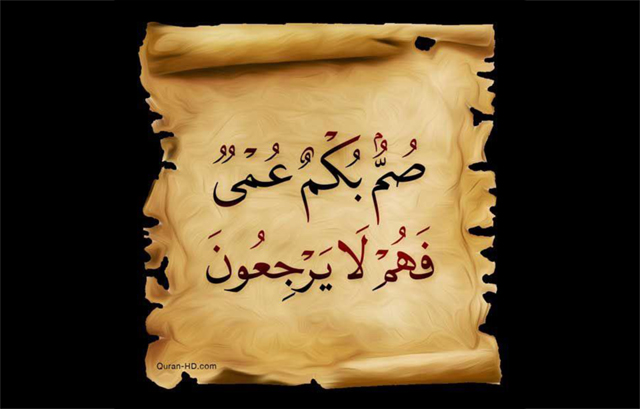