Is there a future? I relate to the article titled “Rigid mind set”. The answer is twofold. According to faith and in all probabilities, it exists. But it does not exist on a rational basis. I'll start with the latter. If we understand what processes take place in our brain and this is what the quoted article is about, then we know that the content of our mind set is the result of the memory stored so far. If my consciousness is completely empty, there is no memory, knowledge, info stored in it, then I cannot imagine anything. If, on the other hand, I store memories and info, I shape all my imaginations based on them. If I don’t have a wonderful seaside image of Ibiza stored in my brain, then neither in my dreams nor in my imagination can Ibiza appear. On this basis, all my ideas about the future can only be created on the basis of the stored memories and knowledge. So, people cannot create a rational vision on future.
But regarding that (and everything else) Allah has much more capacity than we have! His knowledge is inexhaustible and He has no problem with stored knowledge and limited memory. Thus, the images we paint for ourselves about the future are often deceptive.
And now let’s connect to the future of faith and other probabilities that exists. In the faith-based future, we see a polarization among people. One part is on the right track and the others are lost. We know about both who they are, so I won’t detail. In the coexistence of the two, the evil will prevail, they will rule the earth until an era comes, which is communicated in the prophecies and the clear signs of it are also forecasted. The forces of good and evil will clash. Gog and Magog (which may be just a phenomenon) take the stage, with Dajjal, i.e. Antichrist, Mehdi and Jesus. The good will gain triumph, there will be a purification taking place, the world will last for a while, then the end of the world will come. People and the earth itself reach the final stage of their destiny. So far, it is the future of material existence, followed by the non-material future, i.e. the Afterworld. I stop here.

What I said is included in almost every religion. With minor modifications, the point is the same everywhere. This vision of future was communicated by God at all times and places. What does the man do with that? He raises his middle finger and says: a big… ck! That’s bullshit and everything will be going to happen as I’m saying. Well, here the fool collects his poor memories, the knowledge that he has accumulated and forms a vision as it was already described. Once we've ruined here everything, we go to the Mars! If no one can here pay anymore, we’ll introduce the money on Jupiter, lay a tax on the Galaxy, and stuff like that. I am ironic in order to demonstrate how infantile we are from God’s point of view. He caresses our head as we do with our own kid, if he/she draws the long bow. Then He enters the game, let strengthen a self-confidence, how skillful we are, and finally something always happens. We never know what. But it is always something that cannot be calculated, because it is not included in our experiences and knowledge stored so far, so we could not plan a future vision with those!
Let's draw a conclusion, what is the achievement we've reached so far? I summarize the achievements of mankind in one sentence: we already know how the existence can't work, but we don’t know yet how it can! That statement contains everything we know so far and we also get answer, why the direction in the Holy Scriptures is true? After all, if we always just realize that due to our arrogance, we have established only dead ends, we are constantly deteriorating our own situation and the earth! In addition to dazzling our microenvironment with how fucking smart we are, we always discover something and permanently damage the macroenvironment. If this is the reality and there are those who are on the right track and they warn against that trend, will not humanity be polarized? If we destroy all possibilities of life in a material and spiritual sense, are we not ruining the future? Isn't this the End of the World in other words? Isn't that what all Books are about? Isn't that what is shown as ridiculous or performed distortedly in the movies? Aren't Bruce Willis, Sylvester Stallone and Chuck Norris those who will solve these problems at that level? Here we have reached the present state of the brains!

If such a celebrity appears somewhere, he is surrounded by bodyguards, isolated in a first-class hotel, people are licking his ass, and this confirms to many the image that they are truly heroes who will save them and not their wealth and popularity is a threat to them. This is the level! And if a theologian talks about the danger and the bad trend (although this kind of theologians are less and less), he is considered stupid.

Let's sum up. There are two visions of future. Choose.

The Day ye shall see it, every mother giving suck shall forget her suckling- babe, and every pregnant female shall drop her load (unformed): thou shalt see mankind as in a drunken riot, yet not drunk: but dreadful will be the Wrath of Allah. (Quran 22:2)

Three metaphors are used for the extreme terror which the Awful Day will inspire, 1. No mother abandons the baby at her breast in the greatest danger; yet that will happen in this Dreadful Hour. 2. An expectant mother carries the young life within her with great pride and hope: yet the terror will overpower the hope at this "Hour", and nature's working will be reversed, 3. Men ordinarily retain their self-possession except under intoxication: here, without intoxication, they will be driven to frenzy with terror.

Not only will man's sight be dazed, but the great luminaries themselves will lose their light. The moon with its present reflected light will then cease to shine. All reflected or relative truth or goodness will sink into nothing before the true and Eternal Reality.

To the moon the sun will unite. The sun will become a giant red heavenly body and will eat the moon and the earth. See Annex to 81, Surah At-Takwir. 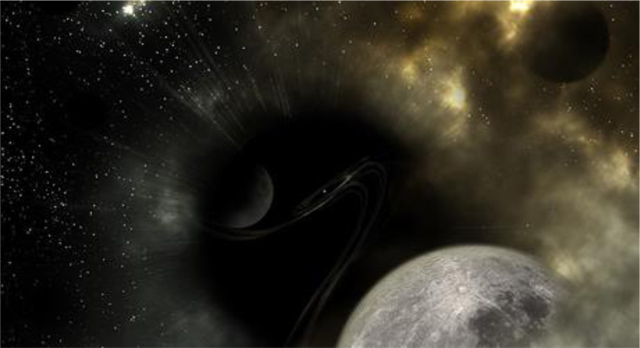