As we all know if the hungarian Prime Minister says something most likely the opposite of the statement is true. It is not a good reference. The person of Prime Minister Viktor Orbán became so embarrassing, that more than a few intellectuelle stayed away from the 30. Bálványos Summer Open University. And though the transylvanian communities were always supported the Fidesz, now it seems that the destruction of the hungarian scientific institute (MTA) caused a strong resentment. Of course, the (governmental-founded) hungarian public media forgot to report about this.

Transylvanian journalist, Boróka Parászka was the guest of one of the last independent radiostations the Klubrádió’s morning show, Reggeli gyors. She said that it is also questionable that how many of those will take part on the evening who previously been listed as performers of this year’s free university.

’The real question of the Transylvanian event, according to the journalist, is not what will be heard on the grand stage – where Prime Minister Orbán speaks every year – but will be untold dring the conversations at Free University and who won’t be there at all.’

Boróka Parászka also talked about the fact that in recent months there have been many protests in Transylvania against Fidesz politics, countless people have expressed their condemnation, but their voice has not reached Hungary. /Klubrádió/

In other words the government still try to fooling us.

Conclusion: It dosen’t really matter what the truth is, untill the government states that we are free, and anything is ok. Somehow without any kind of constitutional rights, people have no opportunity, to check the authenticity of these statements.

What’s even worse hungarian people are too busy arguing with each other senselessly to understand that the current situation is critical. 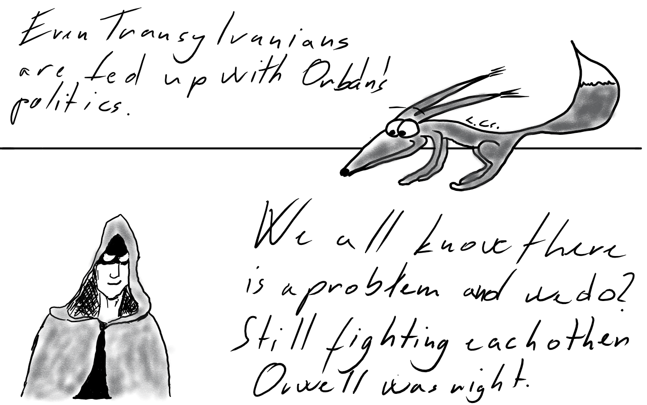 Sun becomes a red giant and Earth will be destroyed
Vélemény